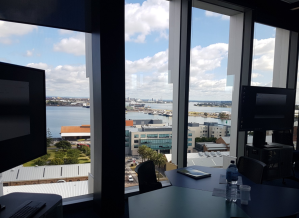 Recently I was involved in  Edtech Talkfest where Erica Southgate, Rachel Buchanen from the University of Newcastle (UoN), Australia and I invited researchers and teachers to contribute to a festival of talking about the good stuff, the barriers to, and the worries about the implementation of educational technologies in schools. Held at UoN’s NeW Space it was a day of diverse ideas and points of view. It is difficult to find a common thread with which to summarise.

A strong theme I saw was that of bounded systems, or systems which have fences built around them. Usually a fenced off area has a gate for moving in and out, but increasingly we are seeing systems being built where gates are being sealed up or communities are being built where there is no need to leave. An app on your phone is a fenced community that is sold as a way to protect you from the wild west of the World Wide Web. For example, you can socialise, get your news, buy stuff, send messages, contribute to campaigns all within Facebook’s fence. 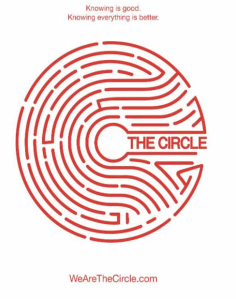 Closing the circle, is the premise of the techno-thriller novel ‘The Circle‘. The plot (very slowly) traces the hiring and life as an employee of Mae at The Circle, a technology company in California. As the (in great need of editing) story unfolds, Mae spends more and more of her waking hours at work. Eventually she moves in. The Circle is described in a way Google is often described as a workplace. Full of everything you need to have a good time, earn money, find shelter and companionship. The challenge we are presented with is what would happen if our democratically prescribed public spaces are brought within The Circle? What if you could vote on Facebook? What if you needed a Facebook login to claim Medicare or social security?

Fencing off spaces is not a method new to our current highly mediated times. The Enclosure Movement in the early 1700s England is often attributed to a reason for the Industrial Revolution. Landowners began fencing their properties which meant there was no longer a need for farm labourers that are familiar to us in fairy tales – goose girls, shepherds, milk maids for example. The enclosure movement caused mass migration to the urban centres in search of work and the beginning of what we imagine when someone says Dickensian. To rescue the dispossessed and poor from being enclosed in the circle of short-survived child labour, transportation, and overcrowded jails, the initiation of public spheres became necessary. These included laws about how old someone could be to have a job, the provision of safe and clean housing, payment for unemployment, and many other democratic benefits including education. 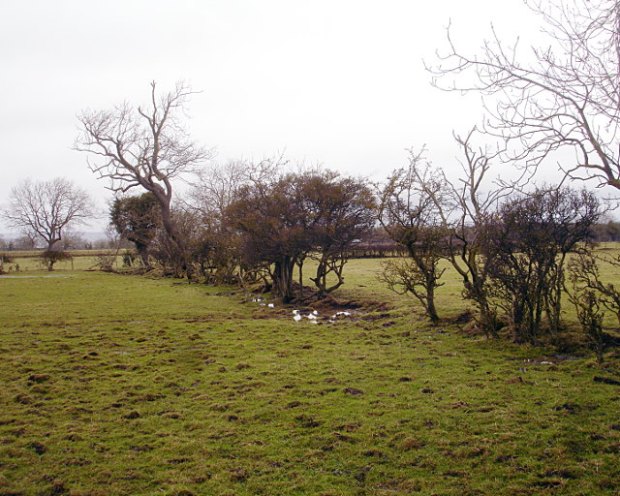 What I noticed during the Edtech Talkfest was evidence that in order to be up-to-date with the latest technology, in order to even use it, bounded systems, the fences and the gates, were often discussed. For example:

When a teacher buys a Lego robot, the technology is expensive, difficult to manipulate without breaking the bot or voiding warranty, and comes with a specific set of instructions.  One presenter talked about how he built bots on the cheap, effectively breaking out of the bounded system of Lego robots. The teachers at a rural high school spoke about how kits for building roller coasters were also limiting the possibilities. Sourcing the materials themselves was raised as a way forward.

The fence that has been built around government and systemic non- government education was again and again raised as a major barrier to implementing technology in schools. Access to social media is blocked, including YouTube which is the app of choice for the cheap Virtual Reality technology Google Cardboard. There was a lot of discussion about how different schools managed to work outside of the constraints of the departmental and systemic spaces. These include BYOD, proxies, and wifi hot spots.

However, during a panel I was fortunate to be on with Rachel Buchanen (UoN) and Andrew C (non- government systemic rep), we discussed the very real problems of inviting technology companies into our public sphere of education. If we opened the door to YouTube, do you know whether the big data miners of Google will have access to the same spaces that house students’ details? Are our governments savvy enough to build strong enough and safe enough fences?

During my presentation I talked about how the digital literacy conversation needs to be changed. I explained how the fences adults try to build around children’s online identity work are not very secure. When adults arrive (teachers and parents) in a new media, the young people tend to run away where they can do their identity work away from surveillance (the theoretical fences adults build to ensure children are disciplined). As adults we convince ourselves they are safe because they are our friends on Facebook. In fact, Huw Davies writes about how teens use Facebook to placate their parents, but do their identity work on Snapchat. However, in my work with teens on Facebook, I found that they were using it to work out how to act when transitioning to a new place like university. As Harry T Dyer says, there is more than one social media and each curates different identities. Teens are doing very different identity work in different places.

The trouble then becomes, who is building the fences around these places? Whose ‘home’ is the identity work being done in?

Adults do their identity work online as well. Identity theory is a part of feminist theory which worked and still works to make private troubles public in order to politicise them. This includes social movements for awards like maternity leave and protections from domestic violence. It is also intersectional in that it is often related to the body. Those parts of our lives which are directly related to our bodies like our gender, skin colour, food, sexuality are often silenced because our social structures convince that they are private. English politeness is a force of violence which cringes when what we do in our bedrooms, or what happens to our bodies when abused is brought into the public sphere. Those who are brave about it are intent on politicising in the public sphere and demanding something is done about private matters which need policy. 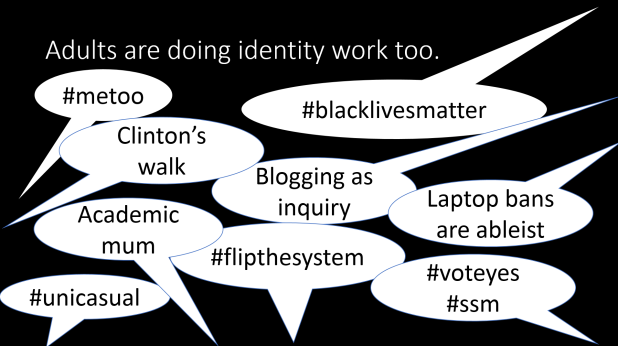 However, when we make private trouble public on social media, it is still a private space. It is owned by companies who are intent on keeping our political bodies private. For example, the #metoo campaign encourages women to speak out about incidents of sexual harassment as solidarity. However, unless women speak up outside of social media, the circle is still closed. But if they do speak outside social media, they risk losing jobs or initiating precarity and poverty. Social media is run by the same business plan that mobilised the gig economy as a virtue. Flexibility is the new white male. Being on board and in a team that doesn’t complain, is the new glass ceiling. The circle is rapidly closing.

So the question becomes how do we talk to kids about doing their identity work in private spaces that are fenced by people who probably don’t have their best interests at heart? How do we make sure that we recognise the importance of their identity work, as it has been important to teenagers for decades? But how do we ensure that they are both safe and unrestricted by the fences that are around? By privatising what is related to bodies, we risk homogenising online representations of youth.